Supercross
Contingency Program Motorcycle Racing Home Racing Home bLU cRU Home
Monster Energy Star Yamaha Racing 450 Team
The Monster Energy Yamaha Star Racing team heads into the 2023 Monster Energy AMA Supercross season armed with returning champions and an all-new YZ450F looking to take a fourth-consecutive premier class title for the team. Reigning 450SX and 450MX Champion Eli Tomac and 2021 450MX Champion Dylan Ferrandis lead the charge, with 2021 250SX West Champion Justin Cooper joining the duo for select rounds before switching to the 250 class for the outdoor season.
Founded in 1999 by entrepreneur Bobby Reagan, Star Racing built a reputation as one of the top privateer teams in supercross and motocross. In 2005, that reputation ultimately secured the support of Factory Yamaha.
As a long-time partner in the 250 support class and amateur ranks, the team has enjoyed a history of success with multiple titles. In 2020, Yamaha Motor Corporation, USA (YMUS), announced a three-year partnership with the Monster Energy Yamaha Star Racing team to field their campaign in both the 450 and 250 classes of the Monster Energy AMA Supercross and AMA Pro Motocross Championships.
2021 marked a stellar debut season in the premier class. After a solid start to the year in supercross, with all three riders earning their first 450SX podium and ending the year fourth, fifth and sixth in the standings, they really hit the ground running in the outdoor season. Ferrandis claimed the title a weekend early with six overall wins and never finished off the podium. The accolades continued as Yamaha Motor Corporation, U.S.A. earned Manufacturer of the Year honors, and the Monster Energy Star Yamaha Racing Team was named Team of the Year.
In 2022, the team enjoyed another year at the top. Eli Tomac joined the team and was quite at home with the Monster Energy Yamaha Star Racing squad and the YZ450F. The multi-time champion went on to have a monumental year, securing both 450 supercross and motocross championships, taking seven supercross victories and 14 moto wins. He also earned his first ESPY Award in the Best Athlete, Men’s Action Sports Category, was captain of the victorious Team USA at the Motocross of Nations, and won more supercross races overseas during the off-season.
Tomac returns in 2023, as does Ferrandis who is hungrier than ever after being sidelined with injuries last season. Also part of the winning Team USA, Cooper heads into the new year with some momentum and will join the duo at select rounds. The New Yorker is eager to make his 450 debut in Monster Energy AMA Supercross before making a run for the AMA Pro Motocross 250MX Championship. The team has been hard at work at the GOAT Farm in Cairo, Georgia, with the all-new YZ450F and looks to keep building on their early success in the premier class. 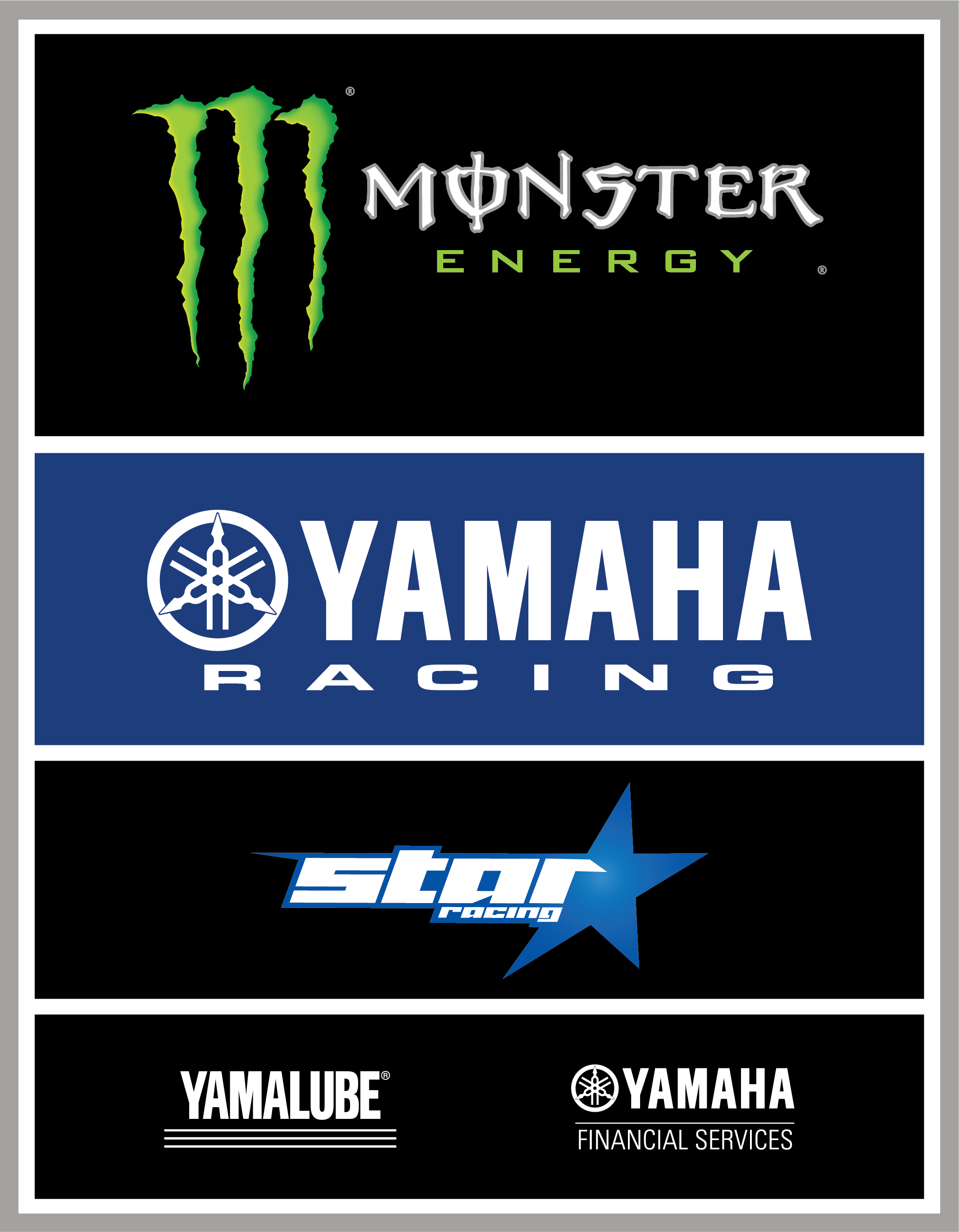 Rider Profile
Eli Tomac #1
Eli Tomac returns for his second year with the team looking to defend his number-one plate in the 2023 Monster Energy AMA Supercross 450SX Championship. After a stellar debut season, the Coloradan looks to carry that momentum into the new year aboard the all-new Yamaha YZ450F.
2022 was a landmark year for the multi-time champion who lays claim to the winningest rider currently active in the premier class. He notched seven supercross wins, including a record-breaking sixth victory at the legendary Daytona International Speedway, to seal the deal on his second 450SX title a weekend early in his home state of Colorado. Tomac tasted triumph again in the AMA Pro Motocross 450MX Championship, coming out on top in a thrilling down-to-the-wire title fight with 14 moto wins and five overall victories. He was also the captain of the victorious Team USA at the Motocross of Nations, took some more supercross wins overseas during the off-season, and was honored with his first ESPY Award in the Best Athlete, Men’s Action Sports Category.
In 2020, Tomac won his first Monster Energy AMA Supercross 450SX Championship and also enjoyed an impressive three-peat from 2017-2019 in the AMA Pro Motocross 450MX Championship. He also has been crowned Monster Energy Cup Champion twice, first in 2016 and then taking the ultimate prize of being a $1 Million Winner in 2018 for sweeping all three motos. In addition to his 450 titles, he was crowned the 250SX West Champion in 2012 and the Pro Motocross 250MX Champion in 2013.

Rider Profile
Dylan Ferrandis #14
Dylan Ferrandis returns in 2023 for his seventh season with the team. The Frenchman has enjoyed a successful tenure with the Monster Energy Yamaha Star Racing squad, earning back-to-back 250SX West Championships in 2019 and 2020, the 2020 250MX Championship, and the 2021 450MX Championship.
Before making his journey across the pond, Ferrandis was one of the top riders in the FIM Motocross World Championship MX2 class, scoring three wins in the support class. He was also a part of the Motocross of Nations championship-winning French team in 2014 and 2018. In 2017, the Frenchman made his Monster Energy AMA Supercross debut, finishing the season fifth in the 250SX West Championship. Unfortunately, his 2018 sophomore season ended early with an injury at the Atlanta Supercross.
Ferrandis bounced back in 2019, establishing himself as one of the top riders in the 250 class. He won the 250SX West Championship, scoring three victories, and then took a runner-up finish in the Pro Motocross 250 class with nine moto wins. More number-one plates would follow in 2020 as Ferrandis won the 250SX West and 250MX Championships, scoring three supercross wins and eight moto wins.
2021 marked a stellar rookie outdoor season for Ferrandis. He earned six overall victories and finished on the overall podium at every round to secure his first premier class title at the penultimate Pro Motocross round. In addition to putting himself in elite company by clinching the crown during his rookie season, he was the first French rider to win the premier class title in 30 years. Ferrandis also enjoyed a great start to his 450SX debut earlier in the year, scoring his first podium at the second Supercross round in Houston, Texas.
In 2022, Ferrandis showed speed during his second 450SX season, scoring a podium finish with his teammate Eli Tomac in San Diego. Unfortunately, he was sidelined and did not get the opportunity to defend his number-one plate in Pro Motocross. Back to full fitness, Ferrandis is hungrier than ever and eager to return to the top aboard the all-new YZ450F.

Rider Profile
Justin Cooper #32
Stepping up to the premier class to race select 450SX rounds on the 2023 Monster Energy AMA Supercross calendar, Justin Cooper returns for his sixth season with the team. When it’s time to go racing outdoors later that Summer, the 2021 250SX West Champion will move back to the 250 team to make a run at the AMA Pro Motocross 250MX Championship aboard the YZ250F.
Before making his pro debut in 2017 at Unadilla MX, Cooper added two AMA National Loretta Lynn’s Amateur Championships and nine major amateur motocross championships to his resume. He was also crowned the 2017 AMA Arenacross Lites East Champion and was awarded the Nicky Hayden AMA Motocross Horizon Award.
In his first season with the team, Cooper impressed with a third-overall finish in the 2018 250MX championship. From there, his forward momentum continued. In 2019, he finished second overall in the 250SX East Championship with six podiums and went on to take his first overall AMA Pro Motocross win in Florida, ending the year third in the 250MX Championship. The New Yorker’s efforts earned him a coveted seat on Team USA for the 2019 Motocross of Nations.
Cooper scored his first supercross win at the 2020 season opener in Anaheim, California, and ended the year second in the 250SX West Championship. After coming back from a pre-season injury, he made a late-season charge in the AMA Pro Motocross 250MX Championship, returning to the top of the podium at Thunder Valley to finish fifth in the standings.
In 2021, Cooper enjoyed a successful season aboard the YZ250F taking three wins en route to the Monster Energy AMA Supercross 250SX West crown. The New Yorker backed it up with a great outdoor season, coming just shy of the title in the end, but led the way in qualifying and holeshots and scored seven moto wins.
Although 2022 got off to a tough start with an injury that ended his supercross season before it started, Cooper finished the year on a high note. He scored a couple of moto wins in the latter half of the outdoor season and played an important role in Team USA’s Motocross of Nations victory at RedBud MX, where he also took the overall win in the MX2 class.