Yamaha has great respect and admiration for custom motorcycle builder Greg Hageman. Based out of Bettendorf, Iowa, Hageman describes himself as “just a guy working in my garage”, but in reality, he has established himself as a premier builder with a true passion for building beautifully simplistic bikes. Shun Miyazawa, Yamaha Motorcycle Project Manager was quick to recognize Hageman’s abilities. “There are so many talented builders today, but Greg has shown his ability to innovate something new by working with the Yamaha Virago to the point where he established custom Virago builds as its own category.”

Hageman started working on Yamaha motorcycles back in the early 2000s. The first Yamaha he customized was a XS650 and he instantly fell in love with the simplicity. That first build kicked off Hageman’s love of vintage Yamahas and to date he has produced dozens of customs. 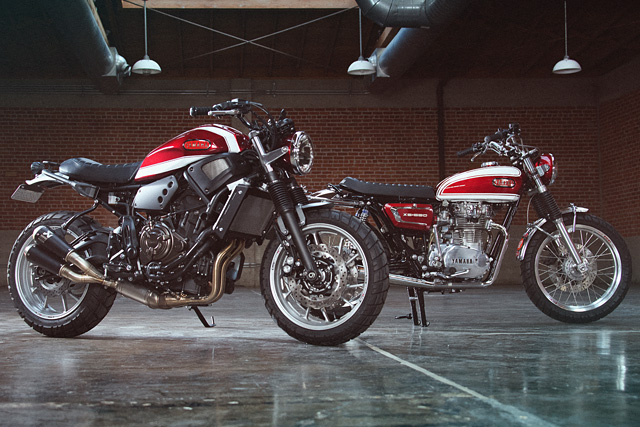 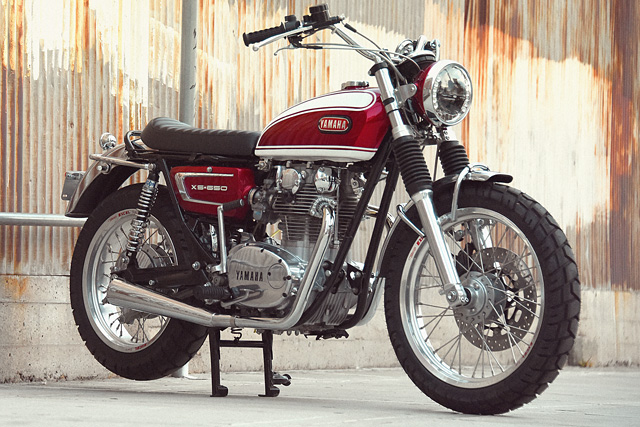 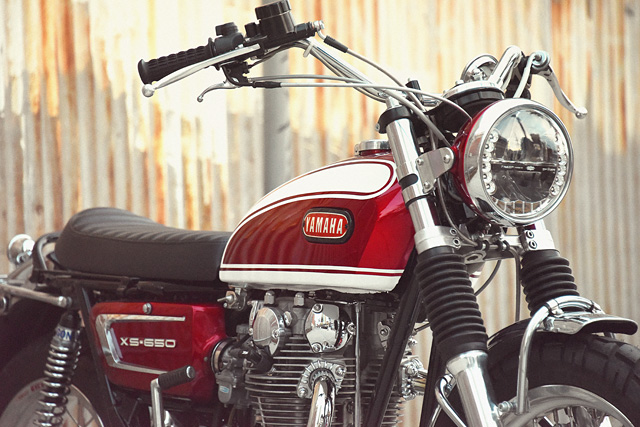 One such build is his “Fast Father” XS project bike, using a nearly mint 1972 XS2 as a platform. Hageman purchased the bike and set about resto modding it with a focus on adding modern day performance. Step one was to send the engine off to Yamaha specialists MikesXS where they performed a full rebuild. They updated the engine using modern parts such as Mikuni VM34 carbs, a Pamco electronic ignition to replace the original points system, and a XSCharge permanent magnet alternator with a lithium battery to run updated LED lighting. 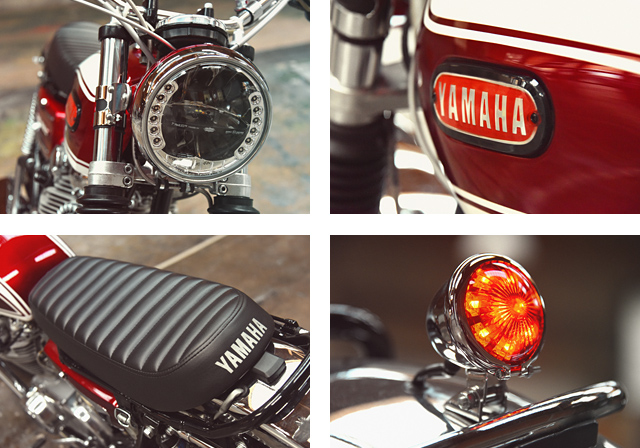 After receiving the engine back at his shop, Hageman updated the chassis with an early 2000-era R6 front end (to retain the conventional fork look) and paired it with a modified SR500 MotoLanna aluminum swingarm with Hagon rear shocks. Hageman retained the XS2 stock hubs, but laced up a pair of Excel rims with stainless spokes to run more modern Shinko 705 radials. After the basic structure of the bike was in place, Hagemen streamlined the look by finishing it off with a custom-made tuck and roll seat and a more modern Speedhut GPS-based speedometer.

Then when Hageman saw that Yamaha was bringing the XSR700 to the U.S. market, he proposed a project idea to Yamaha Motorcycle Project Manager Shun Miyazawa. His vision was to use his XS650 “Fast Father” as inspiration and build a “Faster Son” version using the XSR700. 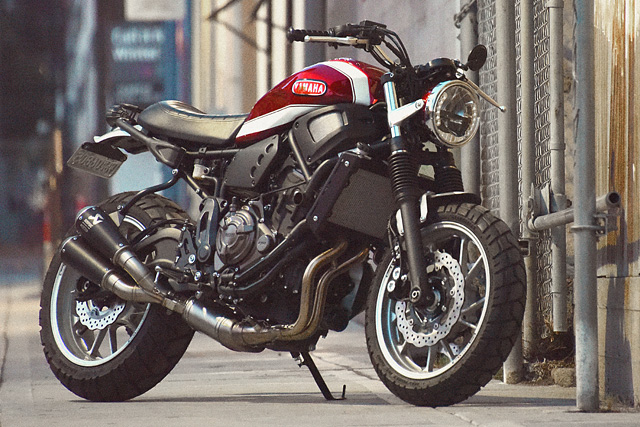 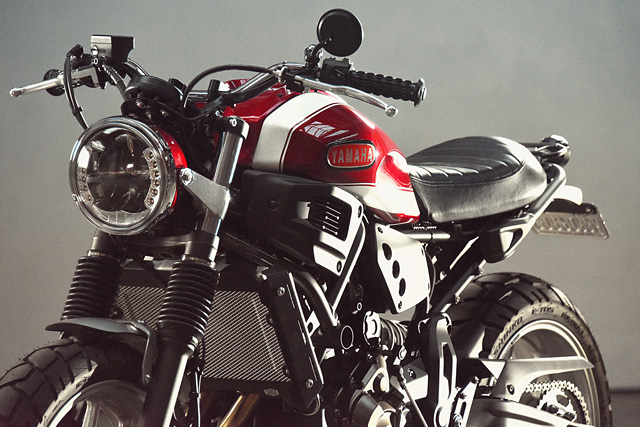 Hageman admits the most challenging part of the build was sitting down and trying to decide which path to take. Hageman adds, “when you build a custom bike, you can keep doing things and then think to yourself, “am I improving this, or am I just making it different”. Yamaha’s Motorcycle Product Line Manager Derek Brooks was quick to reinforce that both Yamaha and Hageman have similar philosophies when it comes to blending the old and new. “One of the big points of the Faster Sons philosophy isn’t so much that we want to make a modern retro bike. If we wanted to make a replica of an old bike, we could do that, ,” he added “We want to offer all the modern technology and performance that people expect today with some flavor of the past. That’s where the XSR700 really hit the mark. We’re paying homage to the past with the performance of today.” And Hageman concurs, “with this XSR project, you’re taking something that’s modern, new and fresh, but we’re connecting it to its roots.”

Yamaha and Hageman both agreed the main criteria of the project be that it remain inspirational yet attainable—something the average rider could replicate in their own garage. “The XSR700 is very custom-friendly. It has all the numbers and the specs and everything to back it all up, but it also has good bones to build off” adds Hageman. “I could have taken this bike and done a full-blown custom and changed everything…but that wasn’t my idea.” “My idea was to take it, simplify and streamline it, and build the bike as more of an inspiration for future buyers.”

The XSR, with its considerably more modern baseline, didn’t need much as far as performance upgrades so Hageman focused on creating the aesthetic synergy between the two bikes. First he added a more retro-style fork gaiters and a 7-inch headlight bucket with high-output LED headlight and integrated turn signals to match the XS2 headlight. While he was focused on the front end, Hageman also swapped out the factory risers for lower profile Virago risers and added lower superbike-style bend handlebars from MikesXS. He then relocated the stock speedo lower and more forward, then streamlined and sculpted the front fender by removing material. 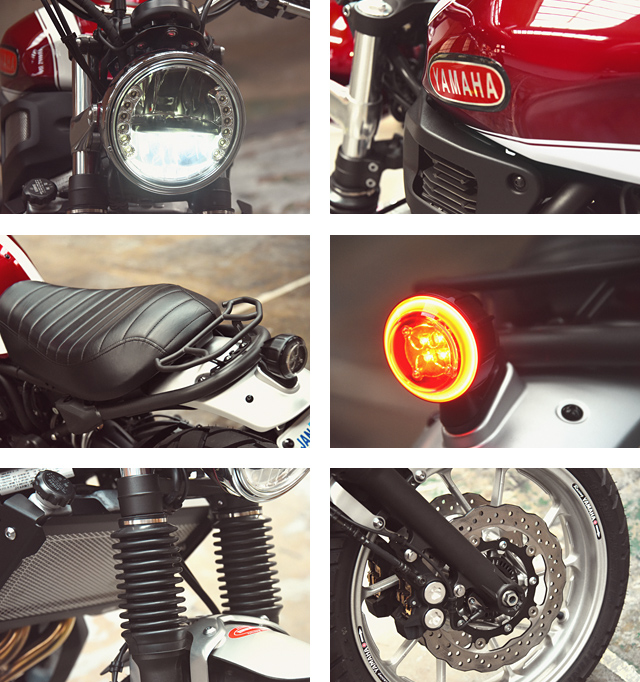 Turning his attention towards the rear of the bike, Hageman added Yamaha’s direct-fit solo seat and rear rack accessory. A custom tuck and roll seat was also added to match the XS2’s seat. As he did with the front fender, Hageman also modified and streamlined the rear fender. To give it that extra bit of retro feel, Hageman powdercoated the stock wheels silver to match the XS2 and added a set of similar style Shinko radials. He originally considered lacing up a set of custom spoke wheels like the ones he used on his XS2, but Hageman ultimately decided he wanted to stay true to the main goal of keeping this bike attainable for the average builder. “For me, I didn’t want to add a set of $3,000 wheels to a $8,499 motorcycle,” Hageman adds. “It defeats the whole purpose of this build, which is to keep it aspirational yet attainable.” Where he did spend some money was on the sole performance part—a Akropovic system to help wake it up a bit when rolling on the throttle.

The final step in tying the two bikes together was to use the same 1972 red paint that was on the XS2. Hageman’s regular sprayer, Moe Colors out of Tampa, Florida perfectly matched up color on the removable XSR tank panels. A signature Hageman touch was adding some self-adhesive retro Yamaha badges to the XSR tank panels in yet another bid to make both bikes look more like “Father and Son”. 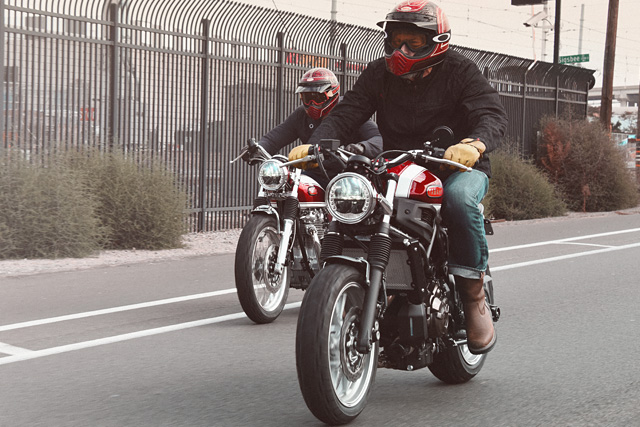 So what does Yamaha think of the final results? “First of all, it’s a very fun bike to ride,” Miyazawa adds. “I like how he respected the original spirit of the XS650 and carried it over to this new platform. It’s not a copy and paste of the original design…he digested the core spirt of the XS650, understood it, and executed it in a slightly different way on the XSR700. It’s much more modern but it still respects the original. It’s impressive how he made the perfect balance between riding fun and the roots of the XS650.” 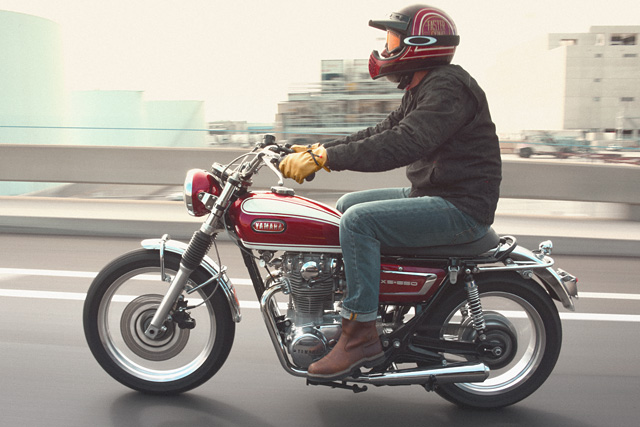 As for Brooks, his favorite part is the overall balance of the design. ”It looks nimble and truly rideable,” he adds. “I’ve seen thousands of custom bikes and some of them…when you look at them, you say, “that looks truly beautiful but I wouldn’t want to ride it” …it looks uncomfortable or just un-rideable.” When I look at this Hageman bike it instantly says “go ride me”.

But what about the builder himself? Hageman replies, “Once you ride it, you’re hooked. It is so smooth. You feel that torque and power…it just wants to go. And it’s so nimble” As far as the XSR platform and customization, Hageman is also a fan of the removable aluminum tank cover panels. “With the removable panels it’s so easy to take them off and have your local painter come up with one paintjob, and then buy and paint another set of panels to create a whole other look,” he adds. And Hageman also adds, “the fact that the XSR comes with a bolt on subframe changes everything. It opens up the bike to so many more changes that the average person can do. You could take it off and just work with that alone or build your own subframe…or leave it off and work a fender off it, etc.” 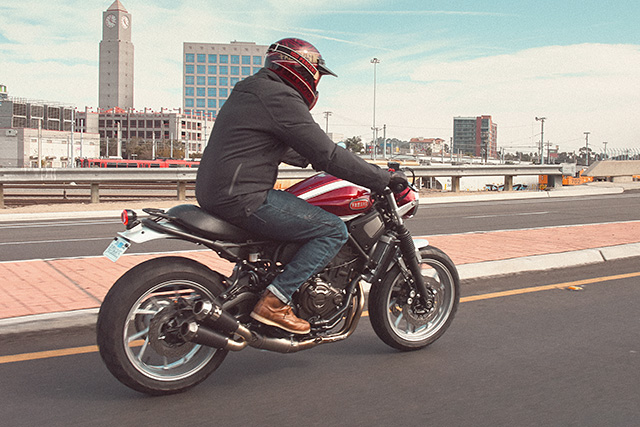 Miyazawa sums up the Hageman project simply – “we’ve gone back to the basics of the Yard Built project with this XSR. Having worked with more than 40 custom builders who pushed out over 50 different custom bikes in last 6 years… this project was about getting back to the basics and taking inspiration from that. Making something special or making something look good doesn’t always require a lot of investment in time or money to accomplish that goal.” 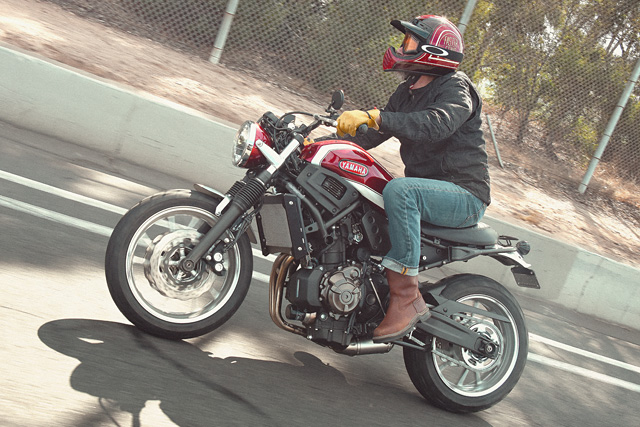 “I’m very happy that Yamaha likes my work”, laughs Hageman. “I’m just a little guy working in my garage and for Yamaha to recognize and like what I do is a really big deal to me. I’m very proud that Yamaha allowed me to participate in this particular Yard Built project.

For more information on Hageman Cycles, visit them at: www.hagemanmc.com