The main idea from Laurence & Sébastien at Lucky Cat Garage was to keep the frame untouched and to keep the Japanese cruiser DNA & soul of the original model. The creative direction was to play with the cruiser stance and go for a small bagger with a clear Japanese flavor. Immediately came the idea of paying a tribute to the Japanese spaceship toys from the 50s and especially to the « Sonicon Rocket » which was featuring a super distinctive paint scheme.

First of all the bike has been lowered thanks to a lowering suspension kit available from Yamaha Accessories range with shorter shock absorbers and fork springs.

To enhance the overall stance the original BOLT tank has been easily swapped to a SCR 950 unit offering a smoother design and a nice fuel capacity of 13 liters which is more than enough with the super low fuel consumption of the engine. 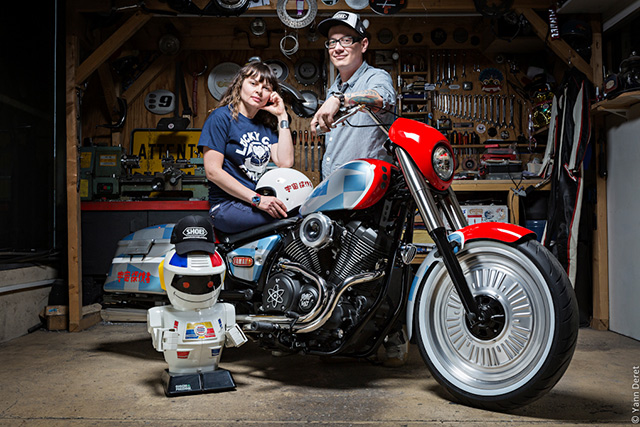 On the front the lowered original fork has been enhanced with modified Yamaha XVS stainless fork covers with hidden mounting system, a upper machined triple tree and a Custom Chrome steel front fender. The small bikini fairing is a tweaked TT&co unit from Japan featuring a clear glass H4 headlight. 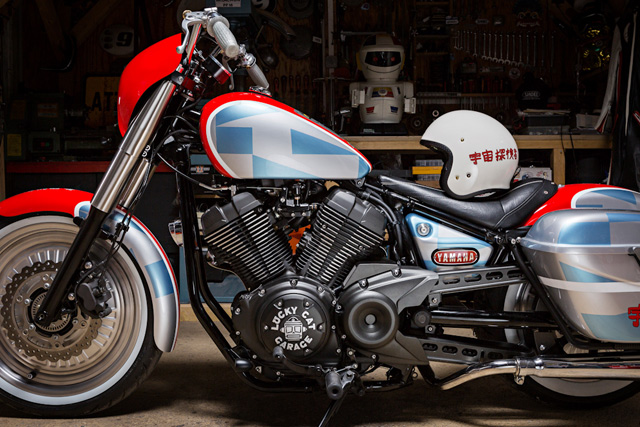 A bracket for a smartphone with a charging plug has be created in the cockpit to get all information from a navigation app.

The tail of the « Space Explorer » has been the bigger part of the work with one-off saddlebags & slim & longer rear fender mounted thanks to one-off bags & fender brackets. The saddlebags are hiding the shocks & belt wheel pulley to keep the width as slim as possible. There is still enough storage capacity in the saddlebags to carry on stuff to travel around! 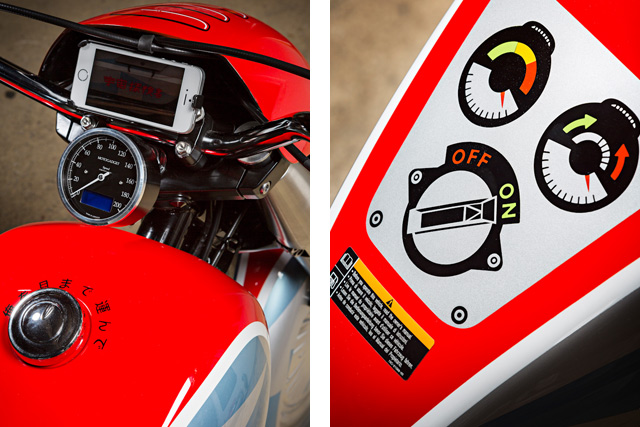 To complete the bodywork, the side panels are revised aluminum covers featuring Yamaha XS650 emblems hiding the keyless RFID M lock antenna from Motogadget. The RFID key has been integrated in a matching Shoei JO Helmet & Rev’it Jacket for keyless operation but the ignition can also be switched on with the Mride app from the rider smartphone. 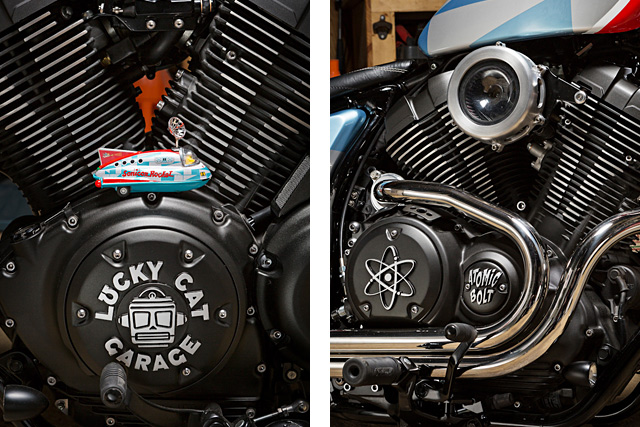 Coming to electronics, the bike is equipped with a M Unit blue allowing to reduce dramatically the wiring coming from the handlebar controls in combination with the M switch mini & M button.

The handlebar controls have been also reduced to the bare minimum with Kustom Tech forged aluminum controls and throttle housing. The front master cylinder is cable operated and placed under the fuel tank between the 2 cylinder heads. NOS Grey metalflake gran turismo grips completed the handlebar with their lovely bulky shape. 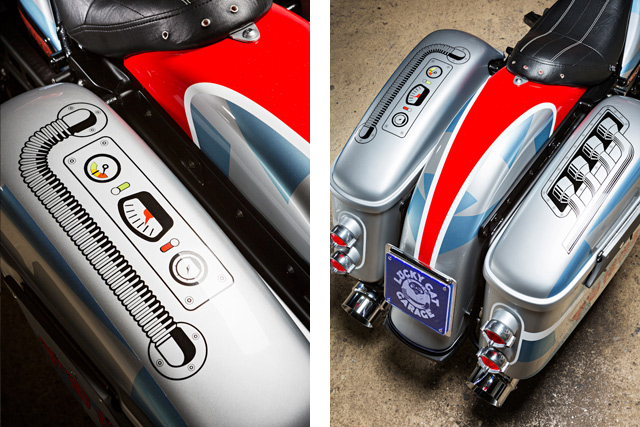 Keeping in mind the tribute to Japanese tin toys the original Yamaha Bolt wheels have been modified with EMD Killer Parts alloy wheel covers which have been satin brushed. The wheels remain in their original size even if the front wheel looks bigger than a 19’’ thanks to this treatment & the Avon Cobra whitewall tire.

The single seat has been made in collaboration with Harley Grove to match the overall design with some nice red rivet inserts to match the paint and remain some spaceship upholstery.

The one-off exhaust headers were made of stainless steel and polished with a new 2 into 2 design throwing into 2 DNA mufflers provided by Custom Chrome Europe.

The engine remains in its original condition with just a little aesthetic upgrade with one off 3D printed covers. The casted aluminum & polished air filter from EMD Killer parts mounted on custom made bracket features a vortex window allowing to see the intake throttle valves in action … just for kid’s fun.

The paint scheme was designed by Lucky Cat Garage in collaboration with Venom Design & Machine 17. Inspired by the « Sonicon Rocket » Japanese spaceship toy from the 60s the paintjob includes typical tin toys decors on top of saddlebags, fuel tank & bikini fairing as a clear statement of the tribute to how these simply shaped toys were enhanced by optical illusion decals.